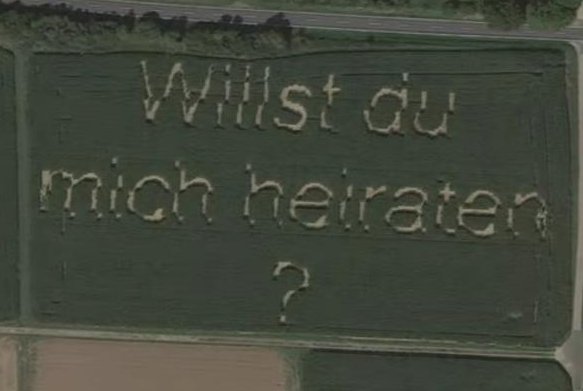 Feb. 13 (UPI) — A German farmer’s unusual marriage proposal involving a corn field and a camera drone had an unexpected side effect — it’s visible on Google Earth.

Steffen Schwarz said an experience helping someone else plant a corn maze gave him the idea to grow corn into the shape of the words “Will you marry me?” in his field in the Huettenberg area of Hesse.

Schwartz said he waited for the corn to grow and then asked his girlfriend to use a camera drone to check the are for wild boar.

The woman spotted the proposal on the drone’s camera and turned to Shwartz, who presented her with the ring when she accepted.

Schwartz said he was surprised to later learn his proposal had been spotted on Google Earth by curious Internet users. He said his aunt, who lives in Canada, sent him a screenshot of the satellite camera photo after she spotted it online.